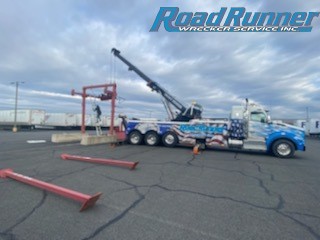 The Road Runner Wrecker Service team was called to an equipment moving job where a huge polar plow had to be disassembled and loaded up to head for its new home in Canada.

The team, headed by tow truck operator Bo,  headed out to Dulles International Airport with a rotator where a popular mail carrier was looking to take down a 4 year old polar plow. Used to swipe off excess snow from the top of trucks, the plow had been sold on to a new home and had to be taken apart.

Getting straight down to business, the team – and the owner of the plow – used ladders to climb the impressive 15-ft structure to begin unbolting the attachments. Made up of around 20 pieces, the job took 4 and a half hours before they could begin moving the concrete slabs onto the awaiting transport.

The plow’s new owner sent an 18-wheel, covered semi-truck to accommodate the equipment moving. Using the rotator to lift and move around the pieces, the team were able to easily load up the semi-truck. Three Jersey barriers weighing 6000lb a piece which were used as counterweights for the structure also had to be moved. Thankfully, the Jersey barriers had built-in hooks which made moving them that much quicker!

After making sure that the super heavy 30,000 lb load was safely secured within the semi truck, the Road Runner Wrecker Service team waved off the plow as it started its journey to a new snowy home in Canada. 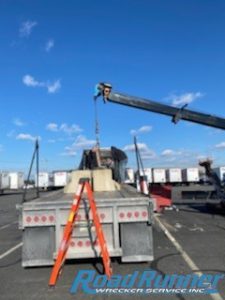 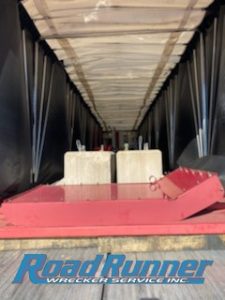 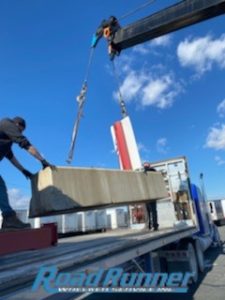