Crane Service Team Called In To Do Some Heavy Lifting

A local building owner in Leesburg, VA, was searching for a reliable crane service operator to do some heavy lifting for him. After doing some thorough research, he decided to reach out to the team at Road Runner Wrecker Service. Yes, you read that right! On top of quality towing, repair, and recovery services, Road Runner also offers their customers safe and affordable crane services!

The building owner had ordered five new air conditioning units for his two story building. While the company he purchased them from were able to deliver it to him, they had no way to get the heavy units onto the roof! This is where our crane service operator, Bo, came to the rescue. Using a powerful 60 ton rotator, Bo carefully lowered the air conditioning units down from the roof.

Safety was of the utmost importance; having an air conditioning unit plummeting two stories down would be a catastrophe! This is why Bo took his time in carefully placing the straps around the air conditioning units. By crossing them underneath the unit, he created a stable platform for them during the lift. Once all five of the old units were safely on the ground, it was time to lift the brand new ones up to the roof!

After less than two hours, Bo had successfully lowered the 5 old units and lifted the 5 new units onto the roof! Fantastic work out there! 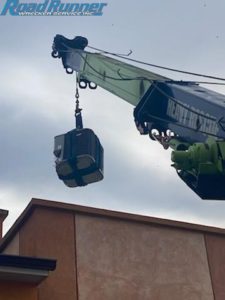 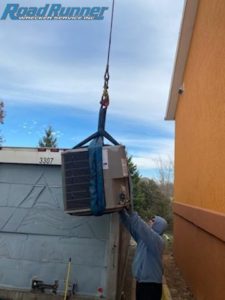 The building was two stories high and had a flat roof. The building owner required the crane service team to lower five old air conditioning units from the top of the roof. Once the five units were lowered, he would then need the crane service team to lift five new air conditioning units to the top of the roof.