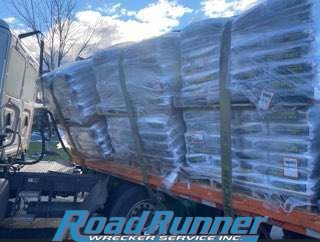 Road Runner’s semi towing team was a key player in keeping a tractor-trailer from rolling over in Leesburg last Tuesday. A truck driver carrying a 25,000 lb load of concrete powder made a  wrong turn into a cul-de-sac. As he tried to get out of the cul-de-sac, he turned a bit too sharply and ended up driving over someone’s lawn!

Committed to the turn, he continued and ended up running over a tree and a large rock prior to getting himself pinned. To make matters worse, his load became unbalanced, causing his trailer to lean at an extremely precarious angle. Any further movement would cause the trailer to completely tip over!

Bo and his rotator were on the scene within 25 minutes of getting the call. There was little room for maneuver so Bo had to keep his rotator slightly closer to the leaning truck than he would have preferred. Bo rotated the boom of his powerful rotator over his cab and picked up the trailer. He kept supporting the weight of the trailer as the driver of the truck moved back and forth until he was able to safely reposition the cab.

Once the cab was cleared, Bo helped the driver offload 4 pallets of concrete powder and reload them in a way that evenly distributed the trailer’s load. Many tow truck operators would have said no to this job as there really was not any room for maneuver and therefore even less room for error. With Bo’s incredible heavy duty towing skills, he managed to save the truck from completely rolling over, losing the load and totaling the truck.

It was good news for everyone … except the homeowner who received some unwanted landscaping. Fantastic work out there, Bo! 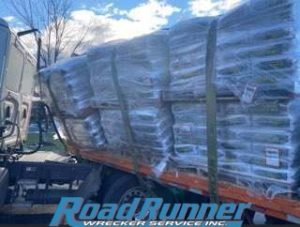 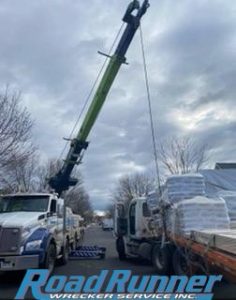