Road Runner Wrecker Service performed a load transfer and recovery on the Loudoun County Parkway on June 3, 2021. A fully loaded semi truck was carrying 43,000 lb of recycled copper parts when the driver took a curve slightly too fast. Within seconds the tractor trailer was off the road, lying on its side in an embankment.

The heavy towing team was on site within 12 minutes of receiving a call from the Loudoun County Sheriff’s Office. The accident occurred at 2:00 PM and the clock was ticking before the start of rush hour. This meant that the recovery and load transfer team had approximately 2 hours to clear the scene.

All the copper barrels were now laying on one side of the overturned trailer. Should the crew have tried to upright the truck as it was, they risked breaking the trailer walls due to uneven weight distribution. Road Runner has a forklift on hand to make off-loading trailers as quick and seamless as possible.

Once all the copper was removed from the trailer, the recovery process could begin. Using two rotators, the heavy duty recovery team began to slowly upright the tractor trailer. The team’s decades of experience shone through as they executed the complex recovery quickly and had the accident site cleared within 1.5 hours!

Fantastic work out there team! A special thanks to the Loudoun County Sheriff’s Office and the Virginia State Police Department for controlling traffic during the recovery process. 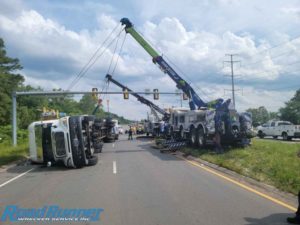 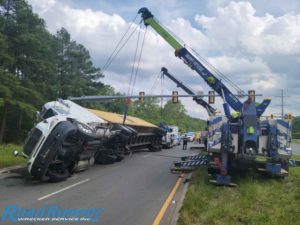 Once the load transfer team had removed all the copper barrels, the recovery process could begin. The heavy duty recovery team hooked the 60 ton rotator to the front of the trailer and to the cab. The 50 ton rotator was hooked up to the back of the trailer. Each of the rotators had both control lines and lift lines to ensure that the truck did not tip over during uprighting.