Construction Towing on I-66 E

Road Runner’s construction towing team responded to a truck breakdown on I-66 E in Fairfax, VA. The tractor trailer was hauling a 40,000 lb beam when out of nowhere, disaster struck and an injector problem forced the driver to an immediate stop. If that was not enough, this happened right in the middle of rush hour! The truck was now blocking the right lane of I-66 with the driver unable to move the truck at all.

Road Runner immediately dispatched their 60 ton wrecker to respond to the incident. The construction towing team’s main priority was to get the tractor trailer off of I-66 in order to avoid a massive traffic jam! Tow truck operator, Bo, quickly hooked onto the front of the truck and towed it off the I-66 to a safe location in Gainesville.

Now that they were off the interstate, the construction towing team was able to focus on the task at hand: supporting the 40,000 lb beam while they swapped out the power unit (tractor) for a new one! You may be asking yourself why Bo and his team had to support the weight of the beam. The answer is simple as the beam itself was not resting on a trailer but was only attached to the tractor with a fifth wheel bar!

Thankfully the 40,000 lb beam was no match for Road Runner’s 60 ton rotator and the team was able to easily support the beam and swap in a new tractor. Great work out there! 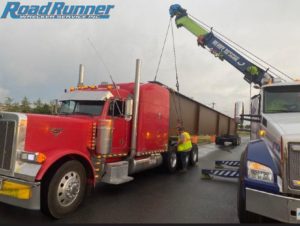 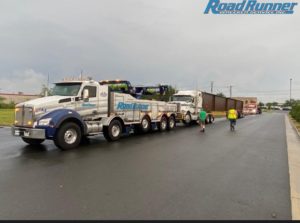