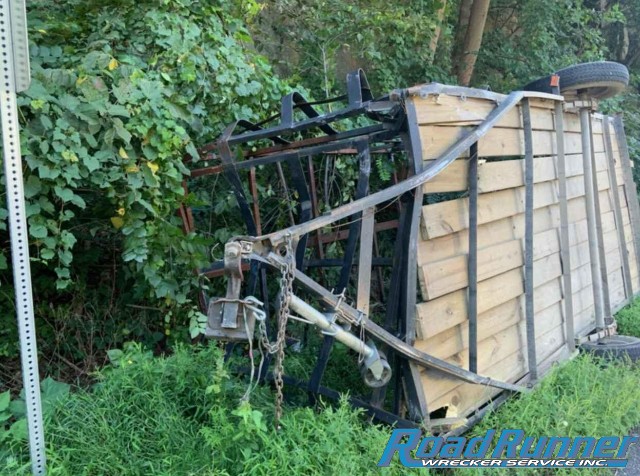 Road Runner Wrecker Service dispatched an accident recovery team to the scene of an accident on August 18, 2022. A box truck was driving on Jefferson Pike and Harpers Ferry Road when it lost control and hit a wall. As the truck hit the wall, the trailer it was hauling swung out and flipped over, hitting an oncoming passenger vehicle!

The truck ended up in a ditch with its overturned trailer and the damaged passenger vehicle blocking traffic. Unfortunately, traffic got blocked up so quickly that our team had difficulty getting there! Thankfully, we were able to secure a police escort to the accident site and our team (composed of Eliuth, Adam, and Dante) was able to get to work.

Eli set his sights on the overturned trailer. Using two safety chains, he attached them around the driveshaft and both sides of the wheels allowing him to safely flip the trailer over. Meanwhile, Adam and Delante were working on pulling the box truck out of the ditch.

Great work out there team! Your quick work allowed the road to open up again and saved a lot of motorists from heavy traffic!

The accident recovery team at Road Runner Wrecker Service received a police escort to the site of an accident on Jefferson Pike and Harpers Ferry Road. Once on scene, the team assessed the situation.

A box truck had collided with a wall. The force of the crash sent it careening into a ditch, its trainer flying to the side and flipping over. Unfortunately, the accident recovery team noted that the trailer had hit an oncoming passenger vehicle. The passenger vehicle was a Mercedes and it ended up with a broken axle and control arm.

The accident recovery team then pulled the tractor out of the ditch. With the tractor, trailer, and car ready to be towed, the team hooked the vehicles onto their respective trucks. They then towed the vehicles to the owner’s requested locations.

By taking an extra five minutes to assess the situation and come up with a strategic plan, the accident recovery team were able to work in the most efficient manner. They had the accident site cleared up in a short period of time, allowing the road to open and traffic to flow freely again.