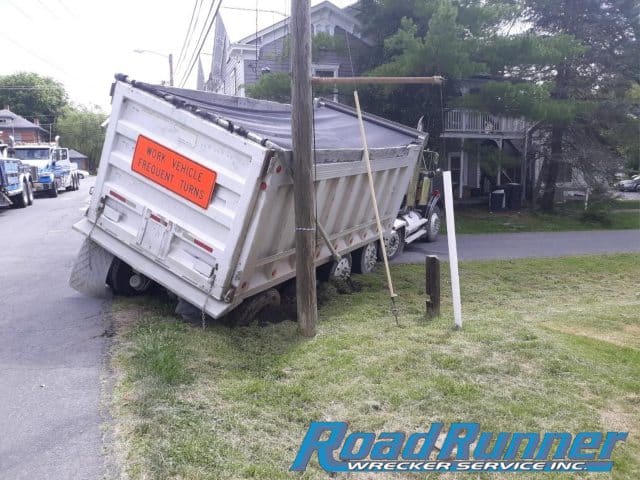 The importance of having professionally trained and certified heavy duty towing operators was highlighted during a tow operation in Lovettsville. A loaded dump truck was making a right turn in a residential area and had cut through a portion of grass on the corner in order to make the tight turn. Before the driver could complete the turn, the dump truck suddenly began to sink.

The grass evidently could not handle the weight of a fully loaded dump truck and the back tires found themselves two feet below ground! To make the poor driver’s life even more difficult, the truck was not only sinking … it was leaning up against a telephone pole!

Road Runner’s dispatcher had assessed the situation and sent out two heavy duty wreckers to the scene. Travis and Corey, two trained and certified operators arrived and jumped straight into action. The truck was blocking the road so it was imperative that they get it out of the way as quickly as possible. This was an extremely tight corner and manoeuvring two heavy wreckers while winching a loaded dump truck was no easy feat!

Thankfully, after years in the field, Travis and Corey had become excellent problem solvers. With expert coordination, they managed to lift the dump truck out of it’s newly dug hole and winch it out of the way. If that was not impressive enough, they managed to do so without damaging the telephone pole. 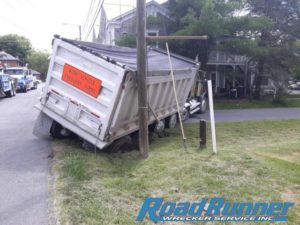